Book Review: The Road to Delano

Synopsis: Jack Duncan is a high school senior whose dream is to play baseball in college and beyond, as far away from Delano as possible. He longs to escape the political turmoil surrounding the labor struggles of the striking fieldworkers that infests his small ag town. Ever since his father, a grape grower, died under suspicious circumstances ten years earlier, he’s had to be the sole emotional support of his mother, who has kept secrets from him about his father’s involvement in the ongoing labor strife.

With their property on the verge of a tax sale, Jack drives an old combine into town to sell it so he and his mother don’t become homeless. On the road, an old friend of his father’s shows up and hands him the police report indicating Jack’s father was murdered. Jack is compelled to dig deep to discover the entire truth, which throws him into the heart of the corruption endemic in the Central Valley. Everything he has dreamed of is at stake if he can’t control his impulse for revenge.

While Jack’s girlfriend, the intelligent and articulate Ella, warns him not to so anything to jeopardize their plans of moving to L.A., after graduation, Jack turns to his best friend, Adrian, a star player on the team, to help to save his mother’s land. When Jack’s efforts to rescue a stolen piece of farm equipment leaves Adrian?the son of a boycotting fieldworker who works closely with Cesar Chavez?in a catastrophic situation, Jack must bail his friend out of his dilemma before it ruins his future prospects. Jack uses his wits, his acumen at card playing, and his boldness to raise the money to spring his friend, who has been transformed by his jail experience.

The Road to Delano is the path Jack, Ella, and Adrian must take to find their strength, their duty, their destiny. 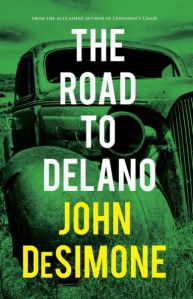 This book falls into the genre I probably read the most (historical fiction), so it was right up my alley. 1968 was a tumultuous year in the US (Assassinations of RFK, MLK Jr., major student protests, to name a few things) with a lot of change happening. This book is about a very specific event and place that year, but it captures the spirit of the air of change that took over the whole country at that time.

I love to read about something I don’t know a lot about and that’s definitely true of the labor strikes of agricultural workers in Delano, CA in 1968. Cesar Chavez is featured in this experience. This story deals with the Filipino and Latino agricultural workers, but could easily have been any number of places with labor strikes during that time period. The story captures the experiences of the two main characters- Jack Duncan and Adrian Sanchez- as they work through the changing landscapes of their lives– Jack as a son of a grape grower and Adrian as the son of grape worker on strike ( his father also is one of the more vocal protesters in organizing the picket lines and such.) Both boys are trying to make their way in the world, decide what matters to them, what they stand up for and believe in as they mature and decide who they are going to be as adults.

It’s a story that is not unique to that experience in 1968 and that’s what I liked the most about the book– young men finding their “moral courage” through a difficult moment endures no matter the time and issues. You really see the evolution of the characters within the book, especially Jack as he transitions more into an adult role in his community.

The writing is good, though I did find some of the details to be a bit too much for me, though the book wasn’t slow and had a suspenseful element to it, which I appreciated as its a bit outside my normal reading comfort zone,

I was provided an advanced copy of the book in exchange for my honest review. All opinions are my own

3 thoughts on “Book Review: The Road to Delano”