Book Review: The Song of the Jade Lily

A gripping historical novel that tells the little-known story of Jewish refugees who fled to Shanghai during WWII.

1939: Two young girls meet in Shanghai, also known as the “Paris of the East”. Beautiful local Li and Jewish refugee Romy form a fierce friendship, but the deepening shadows of World War II fall over the women as they slip between the city’s glamorous French Concession district and the teeming streets of the Shanghai Ghetto. Yet soon the realities of war prove to be too much for these close friends as they are torn apart.

2016: Fleeing London with a broken heart, Alexandra returns to Australia to be with her grandparents, Romy and Wilhelm. Her grandfather is dying, and over the coming weeks Romy and Wilhelm begin to reveal the family mysteries they have kept secret for more than half a century. As fragments of her mother’s history finally become clear, Alexandra struggles with what she learns while more is also revealed about her grandmother’s own past in Shanghai.

After Wilhelm dies, Alexandra flies to Shanghai, determined to trace her grandparents’ past. Peeling back the layers of their hidden lives, she is forced to question what she knows about her family—and herself.

The Song of the Jade Lily is a lush, provocative, and beautiful story of friendship, motherhood, the price of love, and the power of hardship and courage that can shape us all. 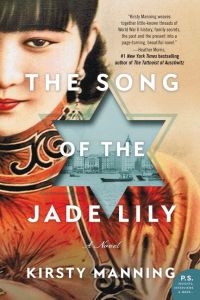 I didn’t mean to read two World War II era novels right on top of each other, but it was interesting to do so because they both were quite different and both exposed stories of World War II that I didn’t know anything about which is always great.

The dual timeline trope definitely seems like a trend in the past few years with historical fiction and depending on how it’s handled, what the purpose is with moving story lines forward and similar questions, I am all for it. It works in this case very well I think because most of the arc of the novel is from the contemporary point of view of Alexandra, as opposed to this back and forth with the historical story and it not being clear what the ultimate story line is.

As part of the TLC Book Tour for this book, I was provided an advanced copy of the book in exchange for my honest review. All opinions are my own.

2 thoughts on “Book Review: The Song of the Jade Lily”