Synopsis: It’s 1949 and South Philadelphia bursts with opportunity during the post-war boom. The Palazzini Cab Company & Western Union Telegraph Office, owned and operated by Dominic Palazzini and his three sons, is flourishing: business is good, they’re surrounded by sympathetic wives and daughters-in-law, with grandchildren on the way. But a decades-long feud that split Dominic and his brother Mike and their once-close families sets the stage for a re-match.

Amidst the hoopla, the arrival of an urgent telegram from Italy upends the life of Nicky Castone (Dominic and his wife’s orphaned nephew) who lives and works with his Uncle Dom and his family. Nicky decides, at 30, that he wants more—more than just a job driving Car #4 and more than his longtime fiancée Peachy DePino, a bookkeeper, can offer. When he admits to his fiancée that he’s been secretly moonlighting at the local Shakespeare theater company, Nicky finds himself drawn to the stage, its colorful players and to the determined Calla Borelli, who inherited the enterprise from her father. Nicky must choose between the conventional life his family expects of him or chart a new course and risk losing everything he cherishes.

Told against the backdrop of some of Shakespeare’s greatest comedies, this novel brims with romance as long buried secrets are revealed, mistaken identities are unmasked, scores are settled, broken hearts are mended and true love reigns. Trigiani’s consummate storytelling skill and her trademark wit, along with a dazzling cast of characters will enthrall readers. Once again, the author has returned to her own family garden to create an unforgettable feast. Kiss Carlo is a jubilee, resplendent with hope, love, and the abiding power of la famiglia. 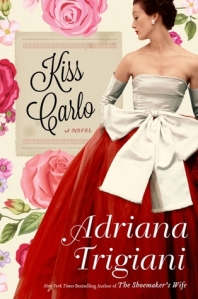 Adriana Trigiani is one of my favorite authors. The Shoemaker’s Wife is among my favorite books and I think she has a real talent for historical fiction and character development. This new book is no exception. It’s rich with detail, but not in a way that makes it feel dragged out or overly long.

I received this book to review in May in the middle of a month of celebrations, preparations for the conference I co-chaired (including running the silent auction which was a HUGE task), and so on. I started the book the weekend before the conference and brought it with me thinking I’d have all this down time at night to read which clearly is a sign of how little I knew about running a conference because I worked 14 hour days and was in bed about 830 every night. Then the past week have been overwhelming with Q’s brother-in-law’s death, so reading really has been the last thing on my mind ( which is saying a lot since it’s one of favorite things to do in life). But this past weekend we didn’t have a ton of things going on, so I powered through the book in no time- which is saying a lot considering it’s 544 pages!

The story really is more about Nicky than the Palazzini family, but what I love about Trigiani’s writing is how she weaves in the lives and details of other characters to create a whole universe that helps you to understand more about the main character and their decisions. She does this very well in this novel. I could easily see several of theses characters having their own spinoff books. I’d particularly be interested in reading more about that character of Hortense Mooney, the African American taxi dispatcher/Western Union telegram lady and Nicky’s guardian angel of sorts. I found her to be dynamic, funny, and heartwarming. I am glad she has a happy ending in Kiss Carlo, but I want to know more!

It’s a novel about love, family, and relationships. It takes place in 1949 Philadelphia and is rich with stories that depict how much change was in the air after World War II. If you enjoy family stories with great character development that really transport you back in time, this novel is for you. Even though it’s lengthy, I think it’s the perfect read for a rainy weekend or summer vacation.

The only negative of this book is that I received an advanced reader copy (ARC) which often are missing acknowledgements or author’s notes, which was the case here. In other Trigiani books, she often provides a rich backstory on what propelled her to write the novel, who some of the characters are inspired by, and so forth. I’ll definitely be looking for the book at the library or bookstore to read that as my curious writer’s mind always likes to know the story behind the story.

As part of the TLC Book Tour for this book, I was provided an advanced copy of the book in exchange for my honest review. All opinions are my own.