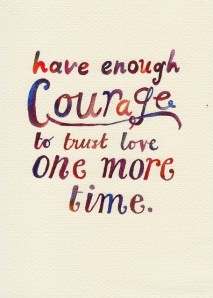 After divorce, some people are bitter. Some people never want to think about love, relationships, and marriage ever again. I was sort of the opposite– I believed in love more than ever before, though was in no rush to find it.

After separation/divorce, I took time for myself to figure out which end was up, dated one person that didn’t work out, tried the online dating pool, though was more focused on myself than thinking about a relationship. I decided to give it a one month try during last winter to meet new people, beat the winter cabin fever by getting out a bit, and see how I felt about the whole thing.

I connected with Q during my last few days on the dating site.

That was over a year ago, and in that time, so much has happened between the two of us, even before my father passed away. He has supported, cheered on, cried, laughed with, and been my partner in crime, but mostly, he’s been the person who made me realize how amazing love is- and can be.

When I stood up for myself and decided my marriage was not making me the person I wanted, I was unsure of what the future held. In standing up for myself, I knew I was making a courageous stand too about what I felt love was ( and wasn’t) and what was important to me.