Archive for the tag “Amsterdam”

The Dutch are not entirely known for their cuisine- chocolate, cheese, and beer seem to be the things they do best. In my prep for Amsterdam, I had only a few food “bucket list” items- Indonesian, croquettes ( the Dutch like to mash things up together and fry them), Dutch pancakes ( essentially crepes), and lots of cheese. 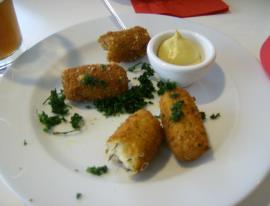 Needless to say, there was a lot of cheese which was fantastic, but there was also a lot of ham. In fact, almost every time there was cheese, there was ham. So much that by the end of the week, I’m pretty much over ham and cheese together. I try not to eat a lot of carbs in my regular diet, but considering I was on vacation, I made sure to eat all the food of the area– by the end of the week, I was definitely sick of the pancakes, sandwiches, and other matter of carbs I was consuming, though since my mom and I were doing so much walking, I actually LOST weight while on vacation!

Dutch pancake with gouda and ham

The Indonesian food did not disappoint- while we didn’t do the rijsttafel (Rice table), a traditional Indonesian meal, we thoroughly enjoyed a wide array of choices with a lunch special that included the highlights of the restaurant’s menu ( with the exception of a fried banana which might have been the grossest thing I ever put in my mouth). The many frites (French fries) we ate from street vendors and restaurants were amazing- I am definitely a convert to eating fries with mayonnaise. 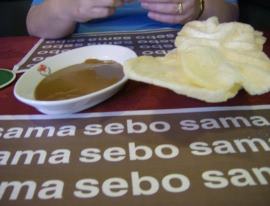 We had some good meals and a few so-so ones; as most Europeans do, breakfast and lunch are big meals and dinners are often small, tapas style, which is smart, but when you’re walking around all day like we were, we found ourselves snacking a lot later trying to quench our appetites. My mom and I both learned we definitely need coffee to function properly ( we arrived in Amsterdam after a red eye and we’re lucky we found our bags we were so out of it) and almost everywhere we went had such small coffees, we probably spent a good portion of our food money buying multiple cups!

The 5 best things about my trip to Amsterdam, in random order:

1. The city: My mother and I spent most of our days strolling through the city streets, making our way down various small alleys and discovering little shops and amazing architecture along the canals. It was a great way to see so much of the city and get lost a bit, though my mother was ever the best navigator with her trusty city map. I think only once did we have no clue where we were going, but since we weren’t on a schedule and just enjoying our time together in the city, it didn’t matter that we were a little lost. 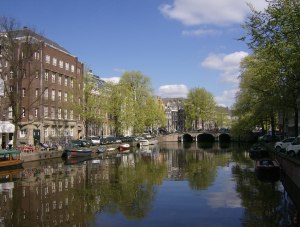 2. The museums: I have a bit of a confession to make. I work in the museum field, but I’m not a huge museum fan. I know, blasphemous. Mostly, this is the case for history museums because that’s what my background is in, so if I do go to museums while visiting a new place, they tend to be art museums. The Rijksmuseum and the Van Gogh Museum were extraordinary- Van Gogh is one of my favorite painters and at both museums I was able to see some of his great masterpieces that I have studied for years, as well as learn of some of his Dutch Impressionist contemporaries who had equally stunning work that I found inspiring. It’s hard for me to fully describe how I felt at The Anne Frank House & Museum– it’s something I’ve wanted to see for over twenty years & the experience well surpassed my expectations.

3. The tulips: Long on my life list has been to see my favorite flowers in bloom in Holland. Prior to our leaving for Amsterdam, I had read that the tulips weren’t in full bloom yet because of a particularly dry spring, but I had high hopes anyway to see the flower fields and Keukenhof. And they were extraordinary. I think I took over 100 flower photos and just loved the day roaming through the flowers and finding so much beauty, color, and greatness.

4. Having a trip with my mom: My mom and I are very close, something I cherish even more as I get older. When I decided I wanted to go to Amsterdam as a way to celebrate my 30th birthday, I couldn’t imagine sharing the experience with anyone other than my mother. She had not been to Holland since she was a teenager and had never seen the tulips either. We had lots of great conversations, laughs, and made many memories that will last through the years.

5. The countryside: On the last day of our trip, Amsterdam was quite crowded too. Alkmaar was crowded too, but then after we left the cheese market our tour took us to a Dutch windmill, now a museum previously a water mill. There is a windmill at one of my organization’s public sites so it wasn’t so much the windmill that excited me but more the quiet and lack of people. 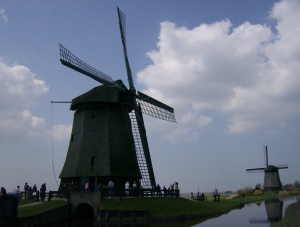 Posted in 5 on Friday and tagged Amsterdam, tulips, windmills | Leave a comment

Not Quite Wordless Wednesday: Cheese 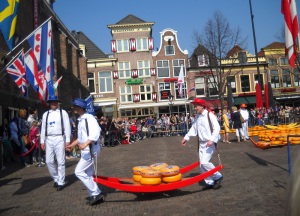 This is at Alkmaar, the 700 year old cheese market in The Netherlands. I don’t remember when I first learned about this place where dairy farmers brought their cheese to be purchased, but I do remember that on a season of The Amazing Race a few years back that the contestants had to try the task of running with the cheese like the men above. When my mom and I were planning our trip, I knew this was something I wanted to do.

The cheese market is only on Fridays for a couple of hours in the morning and only operates from April through September. It’s about an hour from Amsterdam so we took a bus tour there- and it seemed every other tourist in the Netherlands did the same thing. With it being high tourist season from the tulips, Alkmaar was beyond packed in that way too many people in a crowd way that makes you a tad uncomfortable and on edge. My mom and I walked into the square where the cheese is sold before it is run off by these men to the weigh house and there must have been 5,000 people in a small area. I snapped two photos and then we went and sat off to the side to eat delicious frites ( French fries) with mayonnaise. When my mom and I were recounting the trip on our flight home last weekend, she said the crowd at Alkmaar was her second least favorite part of the vacation. It was so crowded we didn’t even get to sample the cheese! No worries though since earlier in the trip we did quite a lot of cheese tasting already.

The big photo download of Amsterdam pics is coming but I’m trying to sift through the over 300 photos between my mom and I’s cameras to get some of the best shots.

There is so much to say from my trip to Amsterdam and about 300 images of tulips, food, beer, buildings,and canals. I’m still a bit jet lagged and behind on life to even begin to capture it all in this place, and I know there will be multiple blog posts on the topic. Suffice to say, the trip to Holland was all that I had hoped it to be and more- it was filled with lots of fun, laughter, and memory making with my mom, lots of cheese, and some of the most gorgeous flowers I have ever seen. While I try to get my head back into the game and my job, I’ll leave this teaser photo of the view from our hotel ( though not from our room).

Posted in Travel and tagged Amsterdam

I can hardly believe that in two months, I will be in Amsterdam and

going to Keukenhof to see the tulips.