Apparently, September is NICU Awareness Month. Before having a child in the NICU, I had no idea such a month existed ( though should have guessed since every cause/affliction seems to have a month).

I’m in a few Facebook NICU parent groups as a lurker/liker as I found it helpful in the month we spent in the NICU to remind myself that we would get out of there and bring our son home. It’s heartwarming to see all the preemie babies with their before/after shots, especially in the last few weeks as many parents post first day of school photos.

I’ve struggled a bit with being a NICU parent because my child “looked normal.” He was born only 4 weeks early and at a healthy weight and size, despite his traumatic birth and lack of oxygen at the time of birth. There were babies in the NICU that were born at 25 weeks when we were there, another was less than 2 pounds, and others born with medical issues. Gray was perfectly fine inside up until his birth so seeing the struggle of some of the other families made our situation feel less dire– sort of like that saying “if you throw your problems in a pile with everyone else’s, you’d take yours out again.” One day in the NICU when we thought our little guy had a kidney infection, I was pretty upset and crying. I stepped out of the room with my mom to go eat breakfast in the family room ( no food is allowed in the baby’s room) and there were 2 mothers in there whose babies were born with some pretty serious medical issues– was sort of the perspective I needed to count my blessings. There were families in our area of the NICU that had been there over 120 days– we spent exactly 30. It was heartbreaking and difficult, but I can’t imagine what it would have been like if things had been much different.

When Gray was born, there was a lot of unknown about his prognosis. With the lack of oxygen at birth, he had to be resuscitated and we didn’t know what damage had been done to his body and systems. He was cooled for 72 hours below normal body temperature to preserve his vital organs and functions- we basically had to wait until those 72 hours were over and they slowly warmed him over 48 hours to know if he would be okay or not. One (horrible) doctor told us he might be brain dead ( it was clear by the end of his birthday that he was not that because he was moving his limbs and responding to stimuli). Babies who come off the cooling treatment often have complications with other body functions and while Gray is doing spectacular for a 3 month old baby, we’re hyper vigilant about making sure he stays on track with all the developmental milestones. We know he is a miracle and are thankful for every single moment with him.

What surprised me the most about the NICU was how many people in my universe had babies spend time there- more than I realized. You often only hear about folks with scary medical conditions or babies born very early– but the NICU is also for full-term babies who have issues of various kinds- breathing issues, heart murmurs, digestive issues and so on. It gave me a lot of hope and strength to know that we’d get through it because lots of people I knew did it before me. It didn’t always help when Gray was struggling to eat or we couldn’t figure out why he wasn’t gaining weight, but we always knew in the back of our mind we’d bring him home. 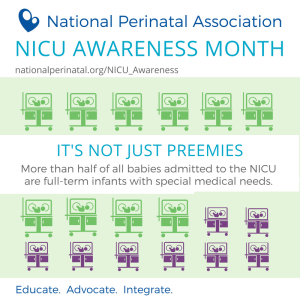