Awhile back I read this article about how many women don’t get rid of their American Girl dolls.

As a gal who grew up in the late 80s and early 90s, I was of course introduced to American Girl pretty early after their arrival on the book and doll market. I can’t recall how I was introduced to the lovely world of Felicity, Kirsten, Samantha, and Molly (the original 4- Addy and Josefina were added as I was ), but since I was a huge reader, the books came first for me and I plowed through them. 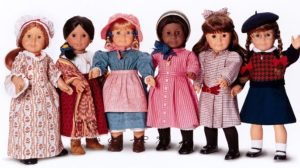 As the creators of American Girl also smartly created the dolls and a whole line of stuff to play to the hearts of the girls who fell in love with them, I had to have one of my own. I was enamored with the Kirsten doll because her name was so close to my own, as well as the fact her family was Swedish which was close enough to my ancestral background of being half Dutch. I was jealous of other friends who had more than one doll, but I didn’t love the stories of the other characters as much, though I’m sure the stories of Molly, the World War II era doll, likely influenced my later interest and studies in the period.

Since I work in the museum world,  I have found that many of my female colleagues who are in my age bracket had an American Girl doll or at least had read all the books. A few definitely thought their interests were related to their love of the brand, and I’m sure that’s at least a little bit true for me too.

As the company expanded its line of dolls and offerings, I got their magazine and other doll accessories, but aged out of the books and dolls by the time they started introducing more historic characters and books. When the original makers, The Pleasant Company, sold to Mattel, they became part of the doll powerhouse it is today with American Girl stores, increased line of doll offerings, and movies. I even applied for a job with Mattel a few years back to be a researcher for them as they were developing new historic characters, but sadly, didn’t even get an interview! I met a lady who worked for American Girl line within Mattel at a conference a few years ago and she confirmed for me it’s a really awesome job.

I have my Kirsten doll up in a bin in my attic and I don’t know if I’ll ever get rid of her ( though I think she could use a spruce up to get her braids done again properly). When ever I get around to the KonMari method of decluttering, the doll will definitely still “spark joy” and make me recall one of the loves of my childhood.

Posted in All About Me, Books