Utah isn’t probably a place high on many people’s travel to-do lists, but it should be! It’s one of the most interesting places, both with its Mormon culture and its amazing geography and natural wonders. My aunt lived there over 20 years ago and now has made it her home again. Q had never been to to the state, and it had been so many years since I was last there, that we were both anxious to visit. We also both desperately needed a vacation!

We were in Utah for a week and packed it full of time with family and exploring. We spent a few days down in Moab to visit Dead Horse Point State Park, Canyonlands National Park, and Arches National Park. The weather was absolute perfection. I kept saying to Q as we were driving around that nothing was familiar to me, but seeing as the last time I was there I was about 14, my perspective of everything was from the backseat of the car. I also realized that we always visited in July ( with one Christmas visit one year) when it was blazing hot so I likely opted to stay in the air conditioned car instead of hiking around. 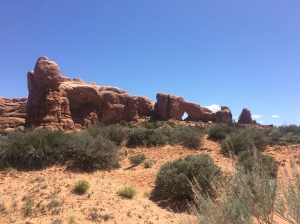 This photo is the best because my aunt took it.

Q had only two goals with this vacation- to consume as much Jamba Juice and In & Out Burger as possible. He had Jamba Juice every day ( a few days twice!) and we did In & Out 3 times. He was  a happy camper.

This is Jamba Juice visit #1

We encountered some closed shops and roads in the mountain areas where there is still snow and threats of avalanche. Park City is busiest in the winter and then picks up again in the summer, so there were several shops and museums closed for “spring break cleaning” since it was the last week of April. It didn’t dampen our spirits though- it was lovely to be out and walking around in the sun.

Two highlights of the trip ( other than spending much needed time with family): Hole in the Rock in Moab and Gilgal Gardens in Salt Lake City. The first is a totally wacky roadside stop and essentially historic home that is built into the giant rock. You cannot take photos inside, but it was quirky and weird in a way that I love– it had everything from amateur taxidermy that was truly creepy to fascinating stories about the couple who used dynamite to carve out their home and diner in the base of this rock. Gilgal is a hidden sculpture garden in a residential neighborhood of SLC that was quiet and quirky.

The view from my aunt’s porch