It’s a Catholic shrine, church, retreat center,and more, but at Christmas they are famous for their Christmas light displays that highlight the Christmas story and Catholic faith. It’s incredibly popular, maybe because it’s free and who doesn’t love Christmas lights!?!? 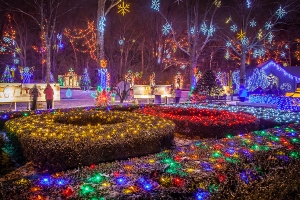 Their first night is always the evening of Thanksgiving. Growing up, La Salette was usually an annual tradition not only for my family, but frequently for my church youth group and CCD classes. It’s located only about half hour or so from where I grew up, making it an easy ride to enjoy some Christmas spirit.

This past Saturday, Q, Little Man and I joined Q’s sister, brother-in-law, and niece at La Salette. It was my first visit in probably 8 or so years, as we went as a family with my exhusband before we were married.

As many times as I have been there, I had never been there for when the lights were turned on, but since we wanted to try to beat the traffic that often piles up for miles on the one road in/out of the shrine, we went early. There is a nightly prayer and reminder of the ‘reason for the season’ and some reflection by the priest. When he flipped the switch, everyone cheered.

Maybe it was because I was feeling sentimental about now being at La Salette with my own family, or because I was already feeling emotional about my Dad, but being there on Saturday felt calming and peaceful in a way I hadn’t experienced before. Maybe it was being there for the prayer and saying the Our Father and Hail Mary with other people aloud. Whatever it was, it helped me feel at ease when I really needed it.

I’m sure a huge part of La Salette’s appeal is just the sheer amount of lights and decorations, plus it’s free, so it’s something fun to do for families, no matter the age or religion. Or maybe it’s that people feel the need to connect with their spirituality in this somewhat passive way, instead of going to a church. I can only speculate on the reasons, but for me, it was a special night that lifted my spirits and got me excited for the Christmas season.