Almost 10 years (!) later, I finally read Harry Potter. Only the first one, but I’ve already got the next 2 from my coworker and they’re on deck after I read a few library holds.

What took me so long? The books came out when I was in high school and I had no interest in fantasy or magic. I probably thought the books were silly since a lot of young readers were into them, though I can respect and appreciate that the series and J.K. Rowling are the reason so many younger readers fell in love with books and reading.

And why now? Partly out of curiosity to see what the hype was all about, especially as this year brought some new Harry Potter related books and movies that brought the subject back onto my social media feeds and had many friends and coworkers talking about it. I originally thought it might be something Little Man and I would read together, but he didn’t have much interest yet ( he is very clearly a Star Wars kid and not much else right now). I also have realized in the past year or so that I do have some interest in fantasy, as I’ve expanded my cultural horizons with the movie interests of Q.

Of course, I loved it. It took me longer to read than I would have liked, as the busy pace of the month of November took over. If I had an uninterrupted weekend to sit down, I likely would have read it in one or two sittings. As it was, when I had 150 or so pages left, I let Little Man watch an extra hour of cartoons on a Sunday morning so I could lose myself in the book ( a perfect way to spend a Sunday morning in my opinion).

And the funny/weird/amazing thing about the timing of my reading it. With the Thanksgiving holiday and the upcoming 3rd anniversary of my Dad’s death, I was particularly emotional last week. I found myself missing my father more than I have in awhile and feeling a bit lost in grief and life. Sunday morning I was emotional and thinking a lot about my Dad after spending Saturday night at La Salette Shrine’s Christmas display (more on this tomorrow), I got to the end of the book, and this passage below. It gave me goosebumps and made me teary, but made me feel comforted in a way I needed. 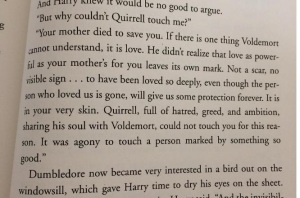 “…To have been loved so deeply, even though the person who loved us is gone, will give us some protection forever.”

I’ve always believed in the power of books for many things, but at that moment, it was exactly what I needed to read.