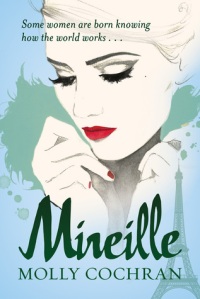 Mireille is a story that begins with 17 year old Mireille in the ending days of World War II.  Through the war, her struggles are many, and turns to high-class prostitution as a means of survival for herself and her child- she becomes known as “The Angel.” Through a series of events after meeting a well-known American film producer, she becomes a very popular, award-winning actress in the United States, but her earlier life and exploits come to haunt her.

Written by Molly Cochran, I read this book as part of TLC Book Tours and was intrigued by this particular title because of my interest in historical fiction. I also really enjoy stories that follow a character through time and various events. Mireille fits both of these characteristics so I thought I would enjoy.

Overall, while the book was interesting, it wasn’t a page turner- there were long periods in between my sitting down to read it on the iPad Kindle app. It’s long-  almost 550 pages– which discouraged me at times, but with a book that is character and detail driven over an expanse of time, that’s not surprising.

I was not so much a fan of the extended abusive relationships/circumstances, but I understand what the author was trying to achieve with these details. It definitely was not the feel-good historical romance I often read. But as much as I disliked some aspects and often got lost in some detail, I wanted to know how Mireille was going to do, especially as she navigated her way from each situation, often going from bad to worse, but always with her and her daughter’s well-being in mind. While this book is not for everyone, Mireille as a character was interesting and dynamic enough that I thought about her after I was done with the book, which is always a good sign of a well-written and developed character.

One thought on “Book Review: Mireille”